Dinosaurs don’t really lend themselves to cuddles, do they? What dino fans really want is a walking, talking (or roaring), prehistoric predator at their command. Kids will be in roar of these regal reptiles, whether they choose fun or fearsome, remote, app, or infrared controlled. Choosing one is a mammoth task, so we’re here to help! 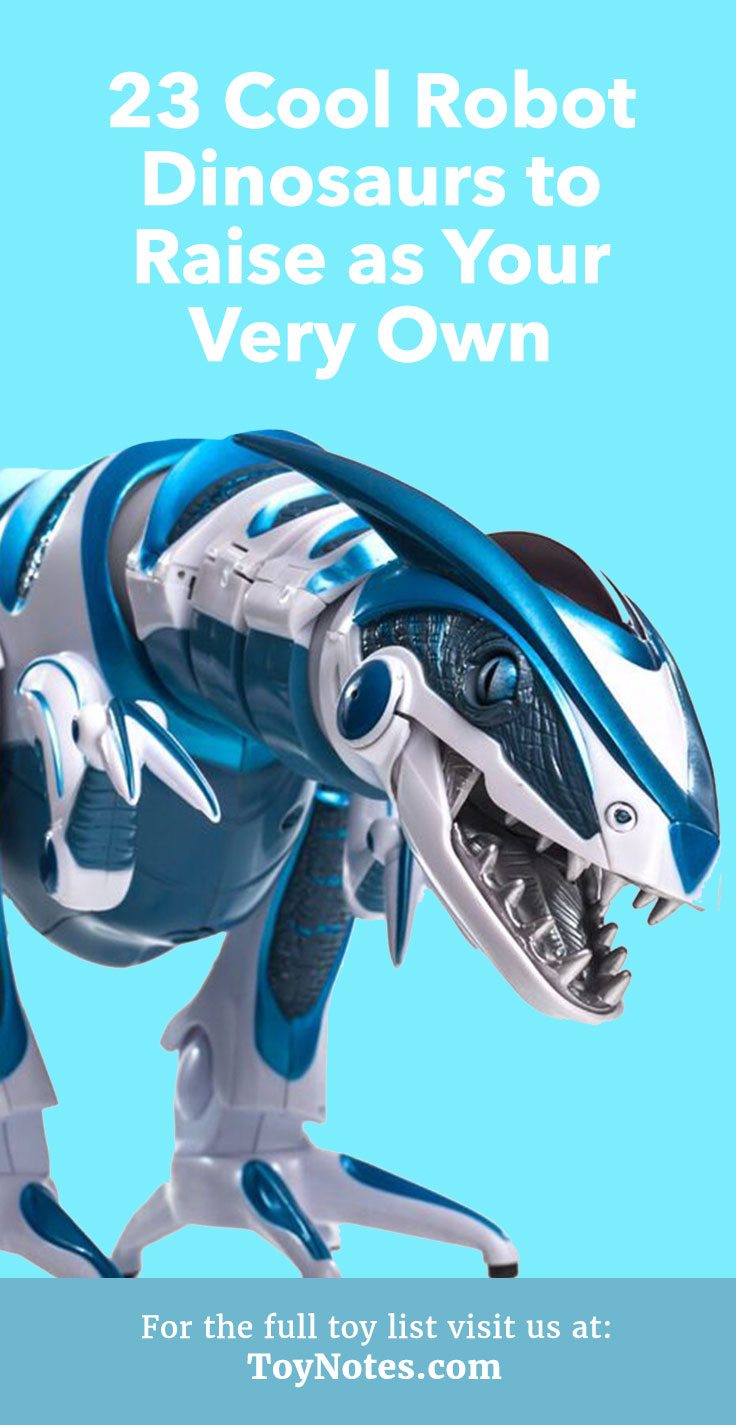 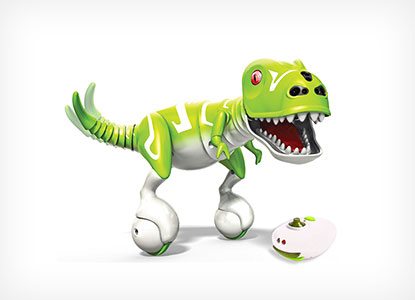 Jurassic Park has nothing on Boomer! This incredible robot dinosaur is as close to a living breathing ‘saur as you’re going to get (thank goodness)! With both motion and remote control, he can respond to hand movements, learn tricks, and even get angry if you pull his tail, all while balancing on two wheels. 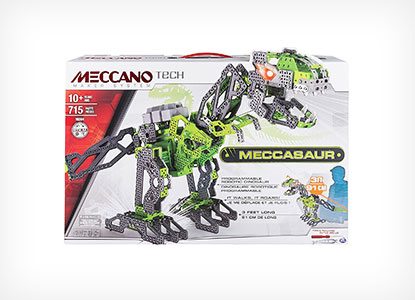 Do you want your prehistoric with a side of personality? Then the Meccasaur is for you! This Meccano dinosaur toy does so many ‘Trex’ he’ll amaze you! Building your pet is awesome enough, but then he really comes alive – answering yes/no questions, stomping around, and even responding to a little TLC (like a teenager, really!) 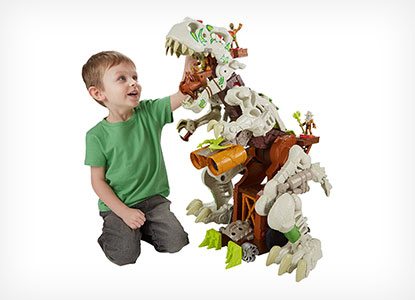 This larger than life (to a child, anyway) T-Rex is two and a half feet of pure dinosaur action! Kids from 36 months can make him walk, stand tall, open and close his mouth (with sound effects), make his eyes and spikes glow, and even launch boulders, because…wait for it…this dinosaur toy really ‘rocks’! 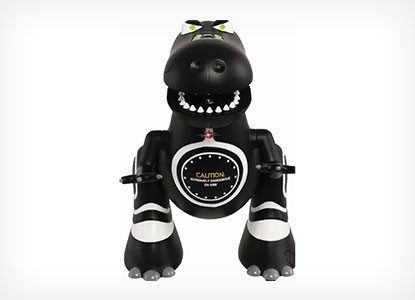 Infrared technology meets pre-history in the ROBOTOSAURUS! Using the handheld controller, dinosaur fans can make this magnificent monochrome monster move forwards, and even spin around on his built-in wheels. Wondering what his name is? With eyes as menacing as his, we think you’ll have to call him ‘Sir’! 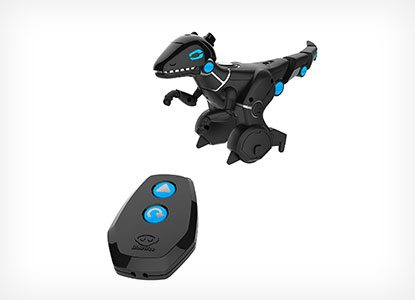 How many dinosaurs can you get in a car? Well, with the Miposaur mini, as many as you want! This scaled down robot dinosaur comes with flashing LEDs and remote control, and is small enough to take with you wherever you go, but big enough on action to keep you entertained! 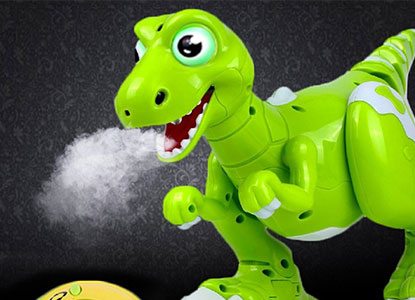 Max is a super-cute robot dinosaur who will appeal to younger palaeontologists. Using the remote control, little ones will master the art of making him move back and forth, left and right, dance, turn around, and even forage for food! Add a little water in his back and Max will even breathe ‘fire’ (ok, mist).

Kids will never be dino-bored with the Sharper Image Robotosaur! This remote controlled robot dinosaur moves around, shakes, spins, stomps, and wags its tail, and when that becomes too much for him he even yawns and snores! There’s no second guessing this gentle giant though – his LED eyes glow and change color to reflect his mood! 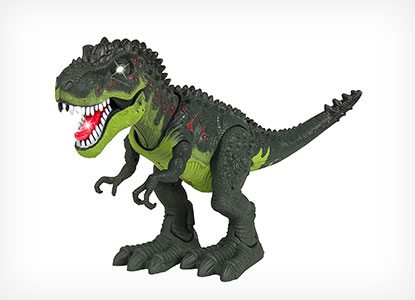 Put the fear of Godzilla into your friends with this fearsome looking Tyrannosaurus Rex! This lifelike dinosaur will roam around the house, searching for his prey, and will let everyone know he’s there by the mighty roar and glowing eyes and mouth. Get in his way and be prepared for some T-Wrecks! 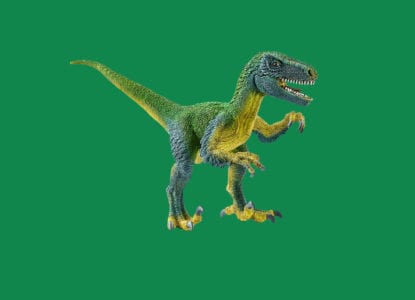 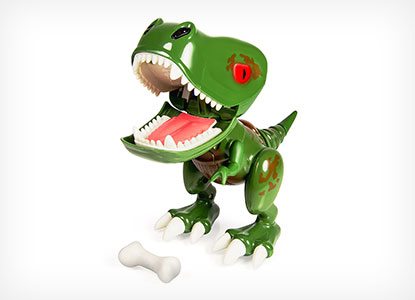 Z-Rex is T-Rex’s more entertaining cousin! This robot dinosaur toy won’t eat you, but he’ll keep you amused for hours. He’ll beatbox or cluck like a chicken, catch a bone in his mouth, and, if you pull his tail you’d better stand back because he’ll fart on your hand and boy does he ex-stink! 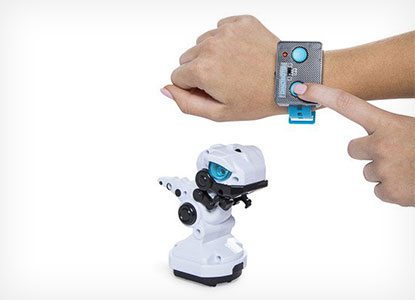 Kids’ll have this dinosaur wrapped around their little finger, or at least their wrist! The remote control watch can make Dinoboto move forwards, backwards, and even spin in a circle while his enormous eyes light up with joy…or is it anger…all at the touch of a button. For ages 6 and up.

WowWee is right! This dinosaur toy is rawr-some! His realistic movements and sounds can be controlled by the remote control or via the free iPhone or Android app, and he comes with three mood modes – Hunter, Playful, and Cautious. With advanced sound, infrared vision, and touch sensors, he’s 32” of Prehistoric fun! 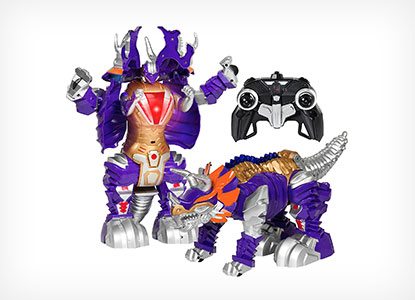 Can’t decide between a dinosaur and a robot? Then don’t! This transformer toy goes from robot to dinosaur with one push of a button, and each mode comes with the ability to chase, spin, and even dance to his own music! With flashing lights and true to life sounds, this remote controlled dinobot is roar-inspiring! 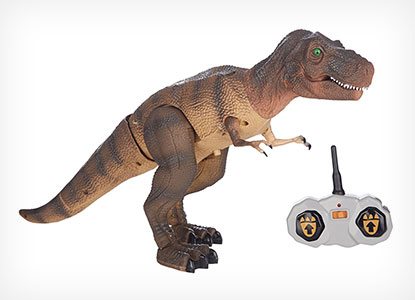 One thing’s for dino-sure, kids will love this radio controlled T-Rex! The lifelike skin, the articulated arms, the full motion legs and the roar…oh that roar, you’ll be hearing it in your sleep (if you don’t turn it off!) Perfect for Jurassic juniors who love their dinosaurs to keep it real. 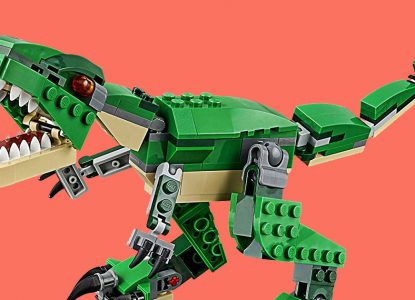 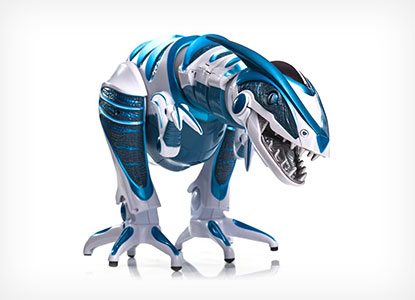 The Roboraptor might look like he’s walking on tiptoes but you’re sure to hear him coming! This blue robot dinosaur interacts with most smart devices, and can see, hear, and feel you, so play nice! He also enjoys playing tug-of-war, as well as walking and running, but it does depends on his ever changing mood!

There are many ways to upset a dinosaur, but pulling her tail will enrage this Indominus Rex! With both motion sensors and remote control, this fearsome dinosaur can also roam your home at will in patrol mode, emitting bone-chilling roars and growls as she searches for her next victim …er…play mate! With certificate of authenticity. 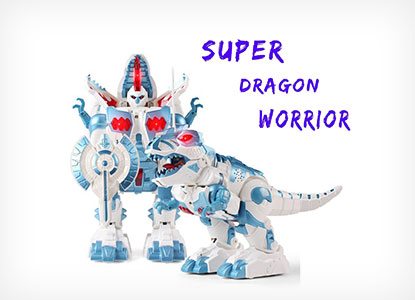 Transform playtime with this transforming dinosaur robot. With one touch of the remote control, kids can easily switch from dino to bot and back again. With real dinosaur sound effects, glowing LEDs, and a full range of motions, this two-in-one toy can even imitate animal sounds, dance, tell jokes, and respond to hand gestures. Roarsome! 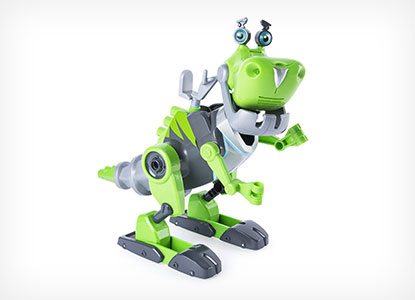 Fans of the show will adore this Rusty Rivets Botosaur! They can watch this cute little dinosaur come to life before their eyes as they build him, and once he’s complete, they can add some of the mechanical parts included to turn him into an exciting vehicle with lights and sounds. A ‘riveting’ dinosaur-building toy. 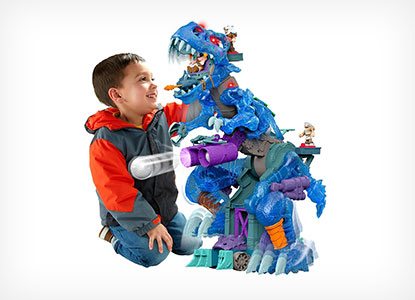 This T-Rex isn’t so n-ice when you get on the wrong side of him! With one push of a button, this giant T-Rex will launch huge ice-boulders from his chest, while a simple turn of a power pad will make him walk, open his cavernous mouth, and fire projectiles. He’s 2½ feet of towering terror. 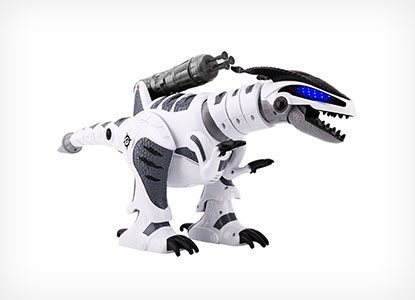 If you’ve ever wanted a dinosaur toy who would do what you told it to, this is the one for you! This prehistoric predator can be programmed to walk/slide backwards and forwards, swing his tail, sing, dance, and rotate his head. This Cretaceous cutie will even respond to touch, or shoot missiles when angered! 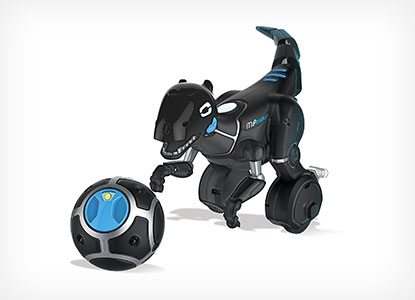 You wouldn’t normally raise your hand to a dinosaur, but this one responds to ten different hand gestures! He also comes with a trackball which he will follow everywhere (great for dino in the middle), and downloadable app. MiPosaur can dance, beatbox, and loves being fed, but put him near another MiPosaur and let battle commence! 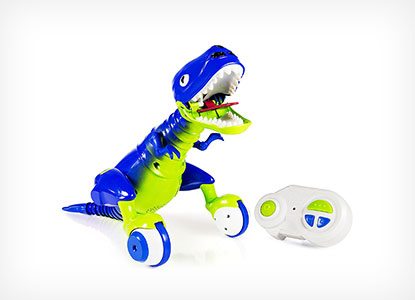 Every species has its fair share of jokers, and Jester is the prankster of the prehistoric era! He likes nothing more than to make you laugh, and will dance and spin til he falls down, just for your amusement. Feeling tuneful? Jester will burp a song, beatbox, and even fart if you really want him to! 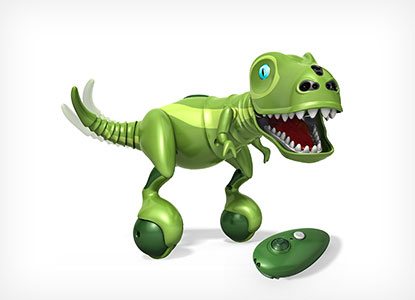 It takes a very special person to tame a dinosaur, but we think you’re up to the challenge! Zoomer Dino Bonekruncher can be trained to burp, fart, chomp, chase, and even dance – if he’ll let you! But watch out, he does have a temper so keep that bone handy to feed him with! Nom nom. 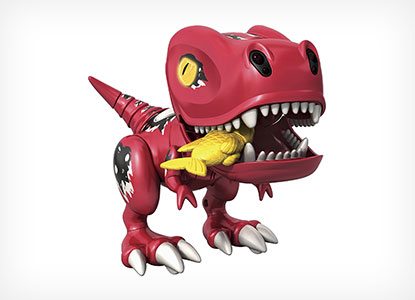 You can run but you can’t hide from this robot dinosaur toy! Not that you’d want to, because Raider is a whole lotta fun. This ancient interactive loves to play games – just watch him catch his fish and chomp down on it! But all that seafood can cause a gassy problem, so don’t pull his tail! 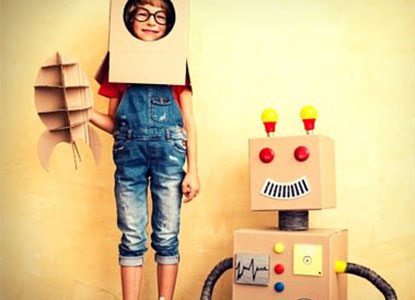 This tutorial from Creation Crate gives you not one but five ideas for home-made robots, with instructions! Whether you choose the Vibrating Bug, Blinky the Pet, the Cute Walking Robot or one of the others, you and the kiddos will have a lot of fun, and some of them cost less than ten bucks! 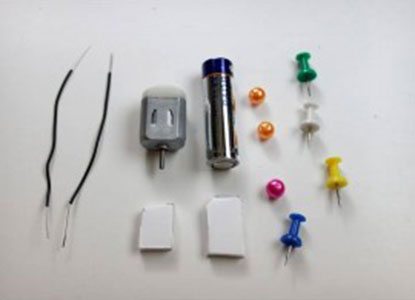 How to Make a Mini Robot

Make an awesome and cute as a button robot at home by following this step by step guide from Red Ted Art. Just a few craft items and a 3V motor with batteries can be transformed into this little vibrating creature with the help of the hot glue gun. Go on, you know you want to!

(You may also like: 24 LEGO Dinosaur Sets for Epic Prehistoric Imaginary Play) 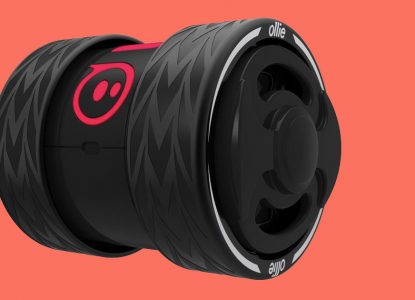 Sphero is more than just a little ball; it’s a ball of joy. Sphero is quickly becoming one of the hot holiday items of 2016. Instead of queueing up virtually or physically, check out some of these alternatives and supplies to make this the best holiday season ever. 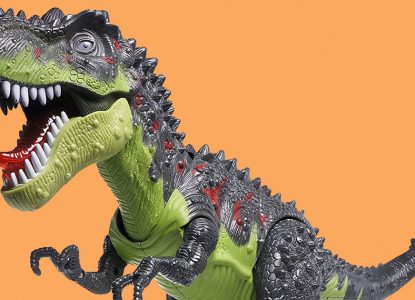 These T-Rex toys are all the rave and are a wonderful way to introduce young children and toddlers to the prehistoric world of dinosaurs. Kids will get a kick out of these roaring action figures, remote-controlled beasts, and game sets! 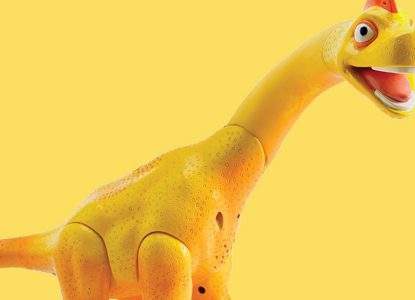 Get ready to ride the rails with this huge list of awesome toys and products from the massively popular PBS show, Dinosaur Train. Children will have hours of fun playing, without realizing they are learning about life sciences and even Paleontology!

LEGO brings us into a world of dinosaurs and adventure in these action packed sets! Watch your child spark their creativity as they learn about different dinosaurs and build their way to fun! A great way to get them into hands on, interactive play while challenging them to build a better world!