These totally yum-worthy unicorn cupcakes might look intimidating, but they’re actually really simple – so simple, in fact, that anyone can make them; the secret is in the colors used, the sparkles added, and the added pinch of fairytale magic. There are cakes piled high with creamy delights, and others with a hidden stash of delicious candy, and even a recipe for making swirly, whirly, unicorn poop. 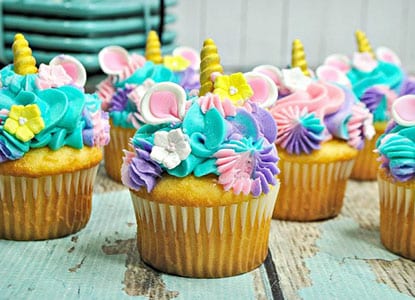 How magical do these cupcakes look? Made using the iconic colors of the magnificent unicorn, the swirling frosting is topped with mini royal icing flowers and the sweetest golden horns ever. 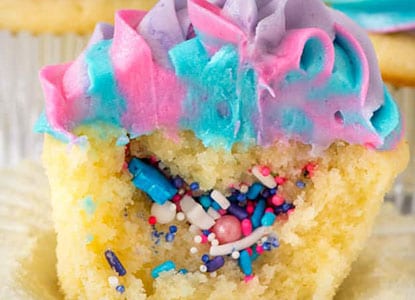 Whether you make your own cupcakes or buy some readymade, you can turn them into piñata cakes by filling the inside with rainbow candy sprinkles, before finishing off with pretty tricolor frosting. 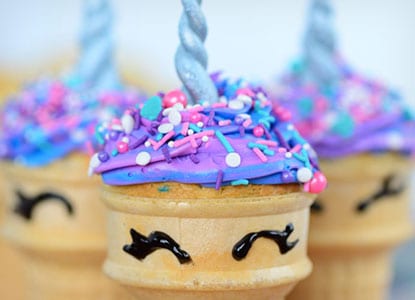 Unicorn Cupcakes In A Cone

Little ones will love the novelty of eating their cupcake out of an ice cream cone, especially one that has been baked inside the cone, and decorated to look like a pretty little unicorn. 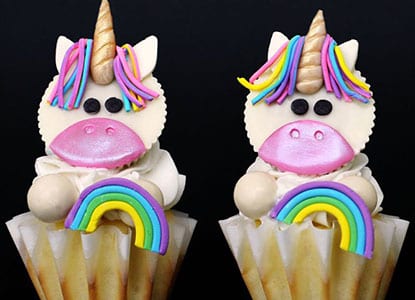 They won’t know whether to eat these cupcakes or cuddle them! Super sweet and very professional looking, these unicorns are made using white Reese’s cups and colorful candy clay. 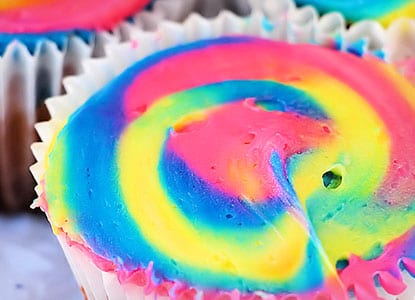 Using Funfetti cake mix and some food dyes for the icing, you can create these mystical-looking rainbow cakes which are surprisingly easy to make, but not surprisingly delicious to eat. 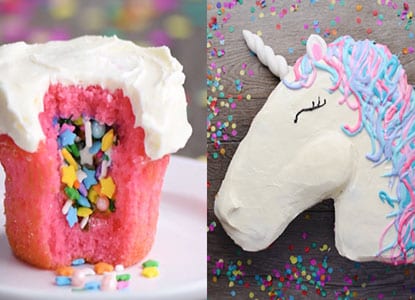 It’s not the recipe that’s unique in this blog post, it’s the way the pretty unicorn’s head is created, and once they’ve pulled their portion out, they’ll find it stuffed full of candy, too. 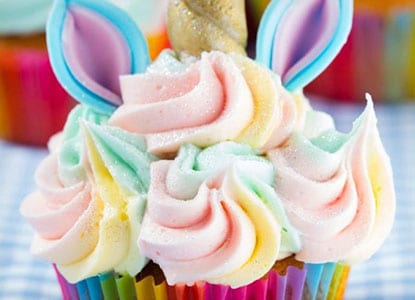 Whimsical and delicate, the icing which decorates these gluten-free cupcakes is applied using cling film to make the pastel colors swirl together, and then topped off with golden horns and sweet little ears. 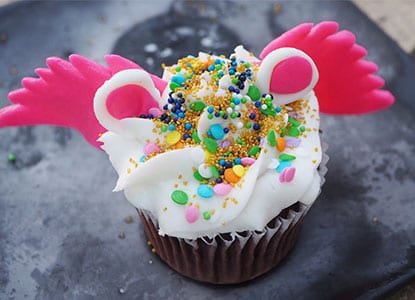 Unicorns aren’t the only magical horse around, and this tutorial will show you how to create both unicorn and Pegasus cupcakes, complete with their respective beautiful golden horns and spectacular wings. 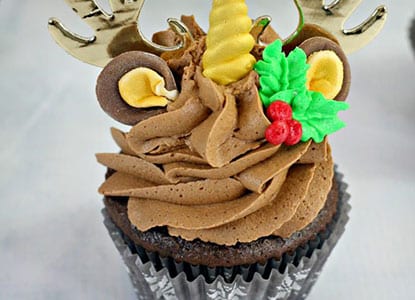 OMG! These cakes are made up of two of the most magical animals alive; the beautiful unicorn, and Santa’s favorite reindeer, sporting antlers, ears, and of course the all-important horn. 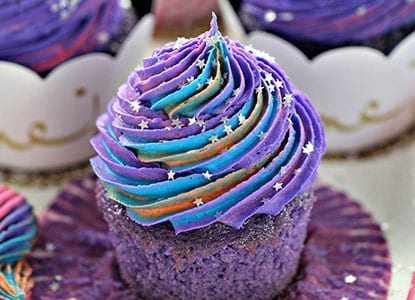 Swirling galaxy colors and shimmering silver stars make these some of the most enchanting cupcakes you will ever see, and they’re perfect for unicorn birthday parties, too. 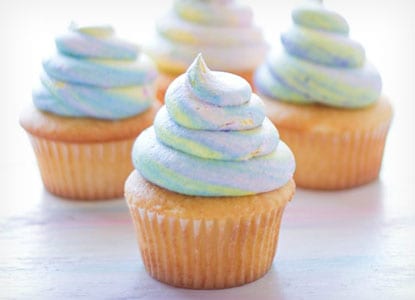 Unicorns can’t put a hoof wrong – even their poop looks beautiful, which makes it ideal for piling on top of a plain cupcake for a magically-themed birthday party. 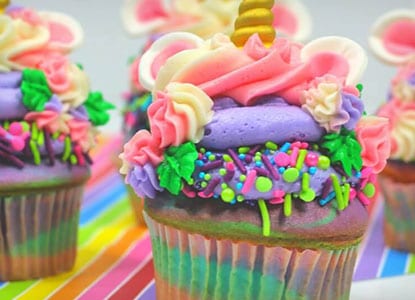 Over the Top Unicorn Cupcakes

Kids won’t be able to stop staring at these gorgeous cupcakes, which are piled high with a rainbow of unicorn colors, and then covered with a sprinkling of enchanting candy pieces. 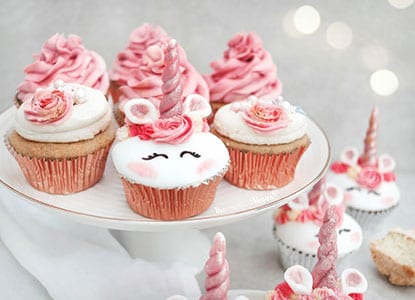 Add a more girly twist to the unicorn trend by following this guide, which shows you how to create these adorable cakes which are decorated in beautiful blush colors. 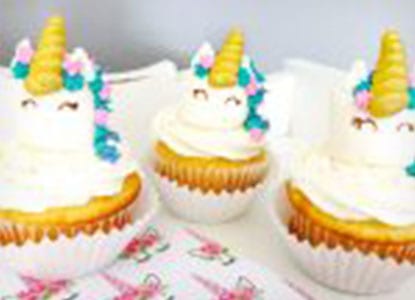 Put all your effort into decorating by using store-bought cupcakes and turning them into these light and fluffy unicorn creations using large marshmallows, melted white chocolate, and a little imagination. 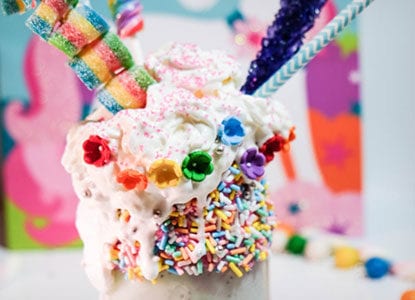 Unicorns add enchantment and intrigue to anything and everything. If you want to taste that magic as well as see it, try one or more of these brilliant unicorn birthday party ideas, which all use ice cream in beautiful pastel hues to create the most magically delicious ice cream treats, because no matter how old […] 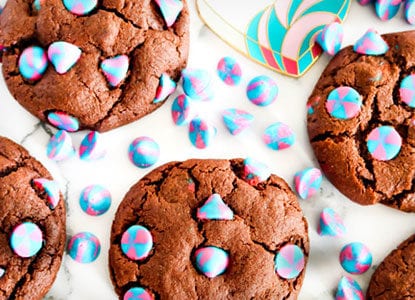 19 Adorable Unicorn Cookies That Taste As Good As They Look

These adorable cookies are a great unicorn birthday party idea as each and every one of them are spectacular in appearance, and use all the colors of the rainbow to really make them stand out. From simple sprinkled sugar cookies to unicorn piñata cookies which actually poop, this selection of treats will take any party […] 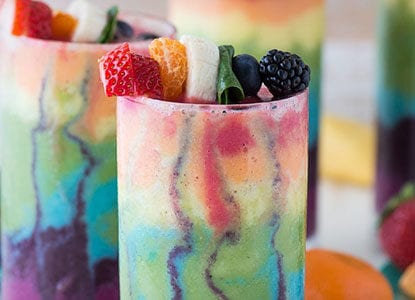 When thinking of unicorn birthday party ideas, you need to come up with some mythical, magical foods and drinks to match the theme. The rainbow colored drinks in this fantasy-inspired list are so OMG-yummy that the adults will enjoy them as much as the kids, and what’s more, most of them are wonderfully healthy, too. 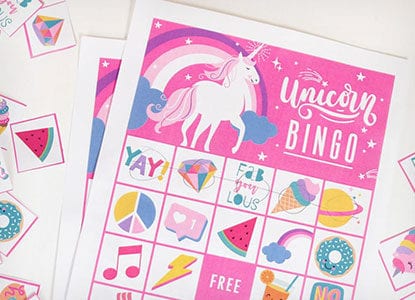 A party isn’t complete without a few fun activities, and this list will fill you with inspiration as it contains some great ideas for unicorn party games that all kids will love. Some are art-and-crafty, while others explore the world of science, and mixed up in that lot are games which are based on the […] 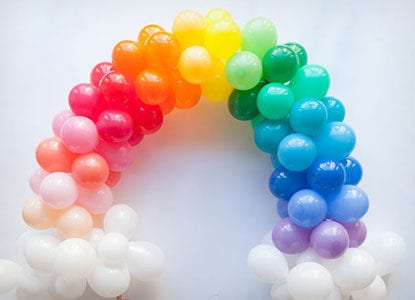 You could just decorate the room in pinks, blues, and purples and it would be unicorn-themed, but we know you want to make it extra special. That’s why we’ve brought together this collection of THE most awesome unicorn birthday party decorations, which you can make at home. From piñatas which are too cute to bash, […] 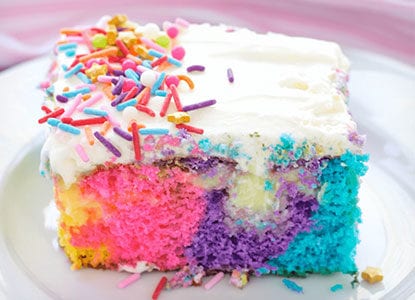 Are you looking for a recipe for a unique unicorn cake to make their next birthday magical? If so, you’ve come to the right place, because these make-at-home cake ideas are ideal for everyone, from the complete novice to contenders for the Great British Bake Off. Plus, they cover everything from simple but stunning unicorn […]